I'm Carol Riggs, author of young adult novels (ages 12-18, but also for adults!). See the Newsletter tab to sign up and get my latest news and giveaways. 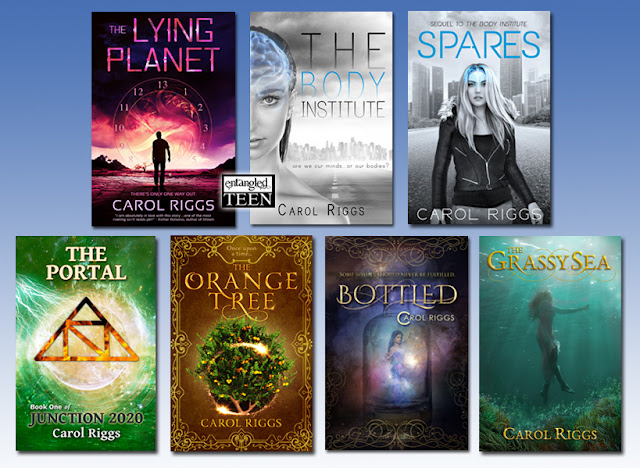 THE BODY INSTITUTE
In a world where the government monitors how much you weigh and "junk" foods are highly taxed, 17-year-old Morgan Dey accepts a job as a Reducer to help other people lose weight--while inside their bodies.
NEWS! THE BODY INSTITUTE is being developed into a TV series by producer Lane Shefter Bishop and Vast Entertainment.
Released January 3, 2021:
SPARES, the companion novel
Lexi Moore is obsessed with going to illegal junk food parties. This doesn’t exactly mesh with her mother being a co-founder of The Body Institute. The Institute’s method of losing weight—downloading worker minds into client bodies—has always been controversial. Danger awaits as Lexi begins to uncover the truth.
THE LYING PLANET
On the planet Liberty, an eerie Machine will test Jay Lawton on his eighteenth birthday. He's worked hard all his life for his rewards...until one sleepless night when he learns a chilling truth.
BOTTLED
Deceived into becoming a genie nearly 1000 years ago, Adeelah is forced to grant greedy masters their wishes while keeping the hope alive of somehow fulfilling her own wish to find her one true love.
JUNCTION 2020, a 5-book series
When Mari Stratton attends a New Year's Eve party on the eve of 2019, she and four others are transported by a violent green storm into an alternate world--where her personal dreams come true and her nightmares are all too real. As the portal continues to thrust the five teens into alternate worlds, each must face the things he or she is most afraid of—while evading the Shifters who seek to exploit them as Mainworlders.
THE ORANGE TREE
Raised by hulking ogres, fifteen-year-old Juniper longs to meet another human. But when an attractive boy becomes trapped on ogre lands, she must find a way to free him before the peace pact between ogres and humans is shattered and the slaughter of villagers begins.
Coming Summer 2021:
THE GRASSY SEA
When gilled warriors abduct her kinfolk, Lyndra of Biresk defies her elders to infiltrate the enemy palace. There, she must find a way to rescue her kinfolk while thwarting the queen’s dark plans to avenge the long-ago murder of the princess.
For more info, purchase links, and excerpts from the first chapters, see each book's page.