This novel is a YA retelling (only with girls, not boys!) of The Prince and the Pauper, with steampunk elements and a splash of Robin Hood. 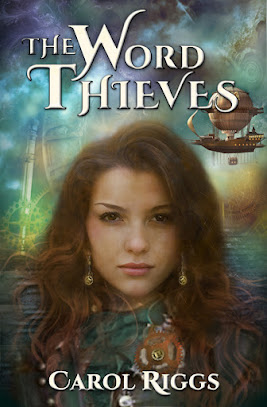 In her run-down district, Taylen Hafferill is known as the “mech-whisperer.” Along with her ability to hear the thoughts of mechanical creatures and converse with them, she leads a ragged band of rebels who protest the heavy taxes imposed by the Gold Monarch.

In addition to the coin taxation, the Gold Monarch has decreed that words are to be taxed, plucked permanently from the commoner’s minds by spider-like mech-collectors. These taxes keep the people weak and under royal control.

At the palace, Lady Eliana of Noviston attempts to please her monarch father as well as protect the kingdom’s four lesser districts. Time and speed in this balancing act is crucial, however, for a grave, evil danger is fast approaching from the east—an Entity that will annihilate her people unless it is stopped. She discovers a key to its possible defeat, but the path to victory is far from clear, and she doesn’t have the power to do it alone.

He’s awake. I can tell by the sudden grunting and cussing coming through the thin walls of our tenement. I slosh my cup and bowl faster through the hot sudsy water in the tin sink. Father is an endless source of frustration I’d rather not deal with today.

I rinse the dishes right quick, dry my hands on a threadbare towel, and run for the front door. I stuff my feet into stockings. My fingers fly over the buckles of my boots. With any luck, I’ll be downstairs and outside before he comes out of his room.

“Taylen!” His door bursts open like an explosion. “You selfish, worthless girl.”

I flinch as the door hits the wall with a loud thud. Too late. I pity the folks living around us.

“I’m heading to work, Father,” I say, scrambling to my feet. “I didn’t expect you up so early.”

He stands in the dim light of our oil lamp, legs braced apart, his eyes puffy and bloodshot. His tangled hair looks downright possessed. He lets out his favorite curse word for me and a hacking cough. “Work? That’s a load of rot. Sun’s not even up. And where the scorch were you last night when I needed dinner? Wandering around with your friends instead of tending to your responsibilities?”

I open my mouth to explain I was helping a neighbor, but he’s not done yet.

“You be where you should be from now on, you hear?” He stabs one finger at me. “Your mother would turn in her grave if she could see how you’re treating your own father.”

A wish for how things used to be rises with force inside me. “Mother would know there isn’t much to eat in the cupboard anyway,” I can’t help saying. “I ate oatmeal and saved the end of the bread loaf for you, along with some butter and beans.”

“Don’t you backtalk me!” He steps forward, almost near enough to cuff me alongside the head.

My heart trips under my ribs. Not today. I snatch my brass goggles from the dining table. “Gotta go. Sorry, you’ll have to make your own breakfast.”

He lunges and swings at me. “You heartless little scrap of—”

I duck, yank open the door, and slam it on the rest of his lecture.

The hallway stinks of mildew, sweat, and stale frying oil. I hurry down the inner stairs of the tenement while Father’s voice echoes behind me.

Am I really those things? Maybe I’m too close to see myself clearly. I’m almost eighteen, old enough to be on my own, so I’m not sure what keeps me tethered to him. I let out a vibrating growl. It’s got to be more than my promise to Mother, swearing I’d look after him. She didn’t know he’d turn into a barb-mouthed tyrant after her death. I should let him starve, let him drink away the profits from his wretched homemade ale.
He’s a grown man. He can live his own life.

The hiss-clunk of steam-powered boilers on each level trail me to the ground floor. I kick a cockroach from the doorway, step outside, and suck in a deep breath to calm myself. The air smells of lye soap and despair. High above me, a predawn glow lights the top tenements. The courtyard is bordered on three sides—claustrophobic, prisonlike. Shabby blankets and trousers hang over the balcony railings, fluttering in the breeze. The dingy sight of it all makes my chest burn. I wish I could fix the way we live. Somehow.

At least the shadows hide some of the ugliness.

My steps are brisk as I walk toward the middle of the Tin District. The streetlamps I pass under are dark, clearly not the palace’s priority to refill with oil. Tenement clusters give way to streets not yet stirring with their normal marketplace bustle.

A lone mechanical jackal slinks around, nosing at rickety outdoor stalls and empty tables. His hinges are well-oiled, his body spikes jagged. I swallow hard and try to act casual. Is he a royal spy, a mech sent from the palace by the Gold Order? I’ve heard they’ve taken to putting recording devices into some of the creatures to listen to our conversations. That could be partly my fault, for the rebellious things my friends and I have done over the past months.

The creature zeroes in on me, his ears and whip-like antennae angling my way. He trots across the cobblestones, padded feet stealthy, the beady spheres of his eyes glowing red. He’s a creepy little beast.

From inside his barrel chest comes the faint whir of clockwork-heart gears. I focus on his silvery chest and send my consciousness into his to see what’s going on inside. His thoughts rise in odd snatches.

With the connection flowing openly between us, I can’t mask my mental snort.

The mech-jackal skids back a foot, like I’ve smacked him. Stop readin’ me, he says into my mind with a harsh whir. You dat “Mech-Whisperer” the Others been talkin’ ’bout?

I direct my thoughts toward him. Yes, that’s what they call me.

He snarls and rattles his body spikes. Turning tail, he grumps a string of parting thoughts. Mechs know what ELSE you and gang of buddy Tinners do. Scab-awful thieves. Scumpots. Palace humans don’t like things you do. I don’t like your doings, either.

Charming. I watch him lope off and disappear into an alley. Why does this mech-beast care so much about my rebel band’s acts of resistance? Of course the Gold Order and the Silver nobility class despise our theft and redistribution of tax coins. Maybe the spy jackal is the ultra-loyal kind who’s fanatical about his job. It’s a bad possibility that he could record us, but at least he can’t speak to tell the royals what he knows.

I cross the street to view the spires and polished metal domes of central Noviston in the distance, roughly three miles from where I stand as a crow flies. There in the hub of the city, the wealthy classes wear silk dresses and fashionable tailcoats, and eat more food in one sitting than I’ve seen in a month. The buildings and towers of the palace are so smooth they gleam in the light of the now-rising sun. Great gears beyond, it’s a beautiful sight.

“Not fair, is it?” a male voice whispers, his breath warm on my ear.

I spin and almost knock into a muscular guy a little older than me. Markell, dark-haired and cocky as always, wears goggles on his cap like a pair of sightless eyes. His sister Farlie bounces on her toes next to him, lighter-haired, fawn-eyed, and thin.

“Gears!” I say. “I didn’t hear you two sneaking up on me. But no, it isn’t fair the royals and nobles keep everything for themselves.”

“That’s why we gotta keep stealing their coins,” Farlie says with an impish giggle.

I cut a quick glance around for the jackal. “Shhh. A palace mech is hanging around, and I think he’s one of those spy types. He’s not a nice beast, either.”

“Sorry, Taylen.” Her expression dims like I’ve yelled at her.

“Hey. We’ve all got to be careful.” I ruffle her hair. I can’t fault her for being eleven and excited about the ancient legends of Robbing Hood. In our group’s modern version of the tales, she’s our best pickpocket and thief.

Markell takes a drag from his taggerleaf cigarette, and blows the spicy smoke out the side of his mouth. “Not ‘a nice beast,’ you say? You been talking to mechs again, Tay?”

“Maybe I was, and maybe I wasn’t,” I say, a tartness in my tone. If he gives me flack about having rogue magic one more time, I’m going to pop him in the nose. It’s the only thing I have left that reminds me of Mother. I refuse to apologize for my skill.

He nudges me with his elbow and leans closer. “So what’d he say?”

I relax the muscles of my punching arm. “Mostly mech gossip. General rude stuff about our band of merry Tinners, and about me specifically.”

He hisses in a breath. “Does the Gold Order know who we are, or just the mechs?”

“The mechs are voiceless,” I say. “They can’t spill our identities because their mind-speak is limited to each other. Well, and to me, since I know the language of the Others. We’ll just have to make sure we don’t get recorded saying something incriminating.”

“But the spy mechs will know who to shadow, to try to get proof of who we are.”

True. His logic sends a fresh spear of uneasiness through me.

“Incriminating.” I smile and rub a dirt smudge from her cheek. She’s the kid sister I never had, shared by Markell as we grew up. “It’s something that gives a clue about what we’re doing and who we are. Evidence that could get us arrested and sent to the death chair. Remember the word for your next round of taxes if you think you’ll never use it again. It might be worth a lot to the word-collectors.”

She breathes out, making a rude noise as her lips flutter. “Taxing words is dumb. I still don’t see why our district is the only one that’s got to—”

Glinting metal spikes catch my eye, and I grasp her arm to cut her off. It’s the jackal coming toward us, fast.