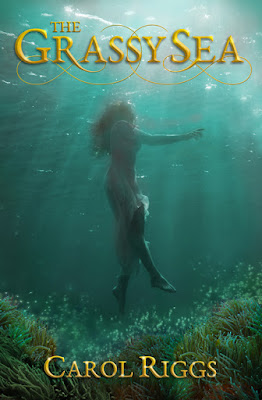 For seventeen-year-old Lyndra of Biresk, her standing in the village has always been shaky. As a foundling abandoned by her mother long ago, she’s not honored like her guild sister, a storyteller who creates magical images in the air with mere words. She’s not respected like her beloved guild brother, Tonn, who never shirks his duties. With her keen sense of smell—an odd skill she keeps to herself—Lyndra struggles to balance her desires with obedience in her tightly controlled community. Her Guardian narhound sticks close by her side amidst a deadly sickness sweeping the village and ongoing unrest with the gilled people who dwell across the Grassy Sea.

When the Grassians attack her village’s fishing boats and abduct seven men, Lyndra’s life begins to twist out of control. Soon a staggering secret causes her village to shun her. Determined to prove herself, Lyndra embarks on a dangerous journey into enemy territory, planning to rescue her abducted kinfolk and thwart the Grassian queen’s dark plan to avenge the long-ago murder of the princess.

But as Lyndra finds herself attracted to a charismatic warrior and experiences the exhilarating freedom of Grassian life, she realizes there are no clear choices along the way.

A faint mewling reaches my ears.

I try to ignore the sound, but it persists like the whine of a mosquito on a summer’s evening. Tonn, wedged high above me in the pommela tree, is shaking branches with his muscular arms to dislodge the higher fruit. Perhaps he thinks the far-off cry is a bird or a fox. My narhound, however, pricks his ears and tilts his slender brown head at me.

Blush-red pommelas land with soft thuds at my feet. Tonn must be tired of picking, because he’s doing it the easy way, risking bruises on the crop. I scoop up the firm fruit and tumble them into baskets. My lodge-mates gather at other trees, their headscarves speckling the orchard with orange, lavender, and magenta. I adjust my own green scarf and wipe dusty hands on my apron. Truly, is this all there is to my life—chores, harvesting, and investigating cries by the river?

The sunlight filters through the leafy branches, dappling my skirts with shade and making me look like an exotic spotted creature. A creature who’s waiting for something to happen.
Something mysterious.

Something thrilling and different.

The mewling increases to a wail as a crisp breeze blows my way. I inhale at the same time Rorf lifts his muzzle to sniff. Curdled milk, soiled wool, damp hair. Familiar aromas of a babe.

Rorf rises to his feet and yips. I let out a long sigh. No other person is taking action. I’d better make haste, although this is far from the excitement I’m craving. A curse on my overly sensitive nose, smelling faraway things no one else can, giving me proof the cries are something besides a forest animal. My furry Guardian smells it, too. He eyes me as though this rescue is my life’s destiny, but I doubt the elder council will welcome another mouth to feed.

A round pommela bounces off my shoulder. Another one smacks my head.

“Ouch!” I step back and crane my neck to squint into the tree. Tonn, propped against the trunk, has his sleeves rolled up and his arms crossed. His dust-brown hair is shoved off his sweaty forehead. From his lopsided grin, I suspect he bombarded me on purpose.

“I wouldn’t be smirking if I were you,” I say. “You have to come down sometime, and I’ll be waiting for you.”

My gaze drops as I hide a smile. For grain’s sake, he’s flirting. Is that what I want? I like him as a friend and fellow lodge-mate, the way he’s always been. Not giving me this new, unsettling kind of attention. It’s one more reason I won’t be waiting when he comes down.

With a snap of my fingers at Rorf, I spring away from the tree. I choose a path at the orchard’s edge that leads to the water. Rorf lopes alongside me, his eyes bright and head low.

Leggy grasses, wildflowers, and star-thistle flank my hasty retreat. My hair, not-quite-tamed into a thick braid, wallops my back as I run.

I take care on the rocks bordering the river, keeping an eye out, listening to the cries grow louder as I head north. Rorf gives a peppy bark and tears off toward a cluster of leafy weeds. My flat leather shoes twist under my feet as I follow. The moss is musty, the water clear and mineral-scented. Yet the whiff of sour milk and wool overwhelms it all.

Rorf halts and pants open-jawed at me, as if he’s smiling. A wailing baby lies by his paws.

“Good boy.” I stroke his head and sink to my knees.

The foundling is red-faced, its tiny fists beating the air. Unlucky child. Just as I expected. Every few moon cycles, folk abandon their children here by the river, babies born out of wedlock or those with parents unable to feed another mouth. It’s lucky our villagers find these children before the poor things starve or a wild animal reaches them.

“There, there.” I peel away a urine-soaked swaddling cloth and see it’s a girl, no more than two moon cycles old. The autumn air is cool, so I remove my apron and wrap her into a tight cocoon. When I place my fingertip against her cheek, she quiets and tries to suckle.

I cradle her in my arms while starting a brisk walk south to the village. It’s not long before she resumes fussing. Rorf bumps his nose against my thigh, as if herding me back to the safety of Biresk.

The briny aroma of the Grassy Sea greets my nose like an old friend as I near the southern gate. I can’t hear the waves roar and splash because of the howling bundle I hold, but they’re close by. The river tumbles only another quarter-mile farther before it reaches the sea. How I envy that freedom! I’d love to kick off my shoes right now and race through a line of frothy surf.

Alas, I have duties.

I cross the footbridge with Rorf. At the high stone wall that encircles our village, I keep my fond thoughts of visiting the beach to myself. The Grassy Sea is not a popular subject. It reminds us of the people who live across its waters.

Bern and Aisen, men of the defender guild who guard the south gate, eye the noisy babe.

“Lands beyond, Lyndra,” Aisen says, his mustache twitching. “You found another one?”

“It’s not my fault.” I adjust the child to quiet her, with minimal effect. The men’s gazes stick to me like burrs as I pass.

I stamp across the compound, kicking up dust in my wake. Yes, I’ve been the one to find the babies lately, but it’s not like I’ve searched them out on purpose. If I belonged to the fisher guild and my duties revolved around the sea, I’d avoid this thankless situation. So much of what my own guild harvests is near the river where the infants are abandoned.

The door to my lodge stands open to let in the breeze. I lean inside and check the greatroom for my guild leaders. Since it’s daytime, our bedding is rolled and shoved against the wall. The women on child duty are changing soiled cloths, playing peek-eye, and feeding pommela-sauce and mashed tubers to young wriggling lodge-mates.

“Where’s Kolina?” I ask the closest woman, speaking over the foundling’s wails. “Or Garth?”

She regards my bundle with a wary glance. “Garth is busy, attending some sort of pre-assembly elder meeting. Kolina’s out back by the cider presses.”

I head to the rear of the lodge and find my guild mother washing pommelas in a large bucket. Two girls crank the presses, twins my age who have the same piercing blue eyes, squarish jaw, and stick-straight hair as Kolina. A third girl tosses the rinsed pommelas into the press feeds. I’ve always suspected the twins are Kolina’s birth daughters. Guild mothers aren’t supposed to have favorites in the lodges, since we all belong to each other, but she keeps these two girls close.

Kolina lifts her head at my foundling’s bellowing. Her eyes widen a trifle before they narrow. “You’ve picked up another one.”

Her statement sounds like an accusation. I try not to bristle on the outside as much as I’m doing on the inside. “It’s a girl, Mother. Shall I find a milk bladder and hand her off to someone in the lodge?”

Her birth daughters stop cranking, the sticky sweet scent of crushed pommelas lingering around us. Their gazes fasten on the baby, and dismay bleeds into their expressions.

It’s not my fault, I want to say again.