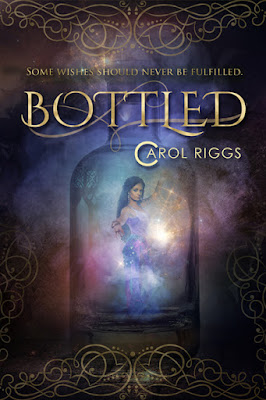 At seventeen, Adeelah Naji is transformed into a genie and imprisoned in a bottle. For a thousand years, she fulfills the wishes of greedy masters—building their palaces, lining their pockets with gold, and granting them every earthly pleasure. All that sustains her is the hope of finding Karim, the boy she fell in love with as a human. When at last she finds a note from her beloved, she confirms he has access to the elixir of life and that he still searches for her.

But someone else also hunts her. Faruq—the man who plots to use her powers to murder and seize the life forces of others—is just one step behind her. With the help of a kind master named Nathan, Adeelah continues to search for Karim while trying to evade Faruq. To complicate matters, she begins to experience growing fatigue and pain after conjuring, and finds herself struggling against an undeniable attraction to Nathan.

As Faruq closes in, Adeelah must decide just how much she’ll risk to protect Nathan and be with Karim forever. How much power does she really have to change her future, and what is she willing to sacrifice for an eternity of love? If she makes the wrong choice, the deaths of many will be on her hands.

"Adeelah Naji is a character to believe in. There are moments of sweetness, moments of adventure, and times when you will gasp (at least I did!). I can’t recommend this book enough."
~Jordan Elizabeth, author of Cogling

Other endorsements:
“BOTTLED is a charming look from inside of the genie’s bottle.”
~Janice Hardy, author of The Shifter (The Healing Wars trilogy)

“Bottled has everything you could want in a story: humor, suspense, action, and romance.  The twists kept me glued to the pages.”
~Elizabeth Langston, author of I Wish and Whisper Falls

“Wish for a great book and here you go! It was lots of fun to be part of this roller coaster ride... You’ll want to read every last page.”
~Julie Fugate, author of Betrayal

Excerpt: first pages of Chapter 1.
Copyright © by Carol Riggs. All rights reserved, including the right to reproduce, distribute, or transmit in any form or by any means. For information regarding subsidiary rights, please contact the Publisher.

BOTTLED: Chapter 1
A disturbance scrapes the edge of my awareness.

I stop twisting the rings on my fingers and concentrate on the intrusion rather than my new master who sits in front of me. Five humans have reached this shabby Arabian hotel, clustering like scorpions in the street far below our room. A niggling sense of them rises up in my mind.

They make their way closer, feet scraping on pavement, their eager breaths rapid and shallow. I get the impression it’s me they want.

While that’s no surprise, the approach somehow disturbs me more than it should, plagues me like a dense thundercloud under my skull. Why is that? The harm is already done. After a century of seclusion in my former master’s crypt, I’m in servitude again. It doesn’t matter if someone challenges my current master for possession of my bottle. One self-centered human master is just as unappealing as the next.

“This is excellent food, genie girl,” my master Bello says, licking mango chutney from his fingertips, ignoring the drips plopping onto the saggy mattress. He’s quite young as masters go. My guess is about eight years older than the seventeen I appear to be, the age I became immortalized.

I frown at his big ears and smacking lips, not caring a half-spittle that I’ve impressed him. Unless perhaps it would endear me to him so I could gain some time off for my own private goals.

That’s an option I’ll have to pursue if he remains my master.

In my peripheral focus, I detect the approaching humans again. They’re surging upward in the strange nomadic room Bello calls an elevator. Their anticipation is so intense, it ripples against my skin. One man in particular leads the way.

Who is this man? I have no idea, but I envision this driving force as my beloved Karim, coming to retrieve me at last. The silky blackness of his hair. The passion of his gaze, the long curve of the scar on his forearm. Perhaps he heard about the powerful blast that unsealed my former master’s burial vault earlier today. Perhaps he knows how Bello stumbled through the debris, claimed my bottle, and wished himself away from the site.

But alas…it can’t be Karim. If it were, I’d be feeling hope and elation rather than the ominous pressure that crowds my skull.

Maybe I should try to hide my bottle from this imminent invasion, but my options are limited. It’s the one physical object I can’t handle or alter. It would be useless to conceal it with the faded blanket that’s wadded upon the bed, since it would be found too easily during a search. I scan the room for other ideas. My attention snags on a doorway to a small bathing area, and a booklet on the wall that shows it’s April. April 1977.

I gape. It hasn’t been a mere century I’ve been locked away from the human realm in that vault. It’s been more like three.

Bello scoops up my slender but sturdy glass bottle from the bed, greed churning behind his eyes. “So you can give me whatever else I want? Gold, whiskey? Foxy women?”

“I’ll grant you any wish within my ability, Master,” I say.

He frowns. “What’s that supposed to mean? Are you all-powerful or not? It doesn’t matter if I have endless wishes if all I can get is chutney, cold beer, and pita.”

I hold back a sigh. I prefer to tell him I’m unable to fulfill any of his wishes, limitless or not, but the bottle won’t let me lie. “My powers are restricted only when the wishes involve people. I can’t materialize people who don’t exist or bring them to you against their will. I can’t make them alive if they’ve died, or directly kill them. I also can’t change their bodies, minds, or personalities. But I’m able to take you places, modify objects, and grant you many tangible things.”

I must say, this guy isn’t the swiftest camel in the caravan. “Things you can touch. No wishing for things like happiness, true love, and infinite world peace.”

His glance bounces around the room. “Touchable stuff. Okay.”

The group of determined humans close in on us, now on our level of the hotel. Even so, I’m not obliged to mention anything to Bello.

And yet…I take another reading of the group, and my awareness tightens into an abrupt knot. My breathing ceases for a moment.

There’s a strong presence among the newcomers. A dark force, a human evil I haven’t felt for centuries, striding down the narrow halls with this group. He’s the leader, the instigator.

Faruq. He’s here, and he’s searching for me.

The thought burns through me. No. Faruq can’t take over as my master. I won’t let him. The type of wishes he desires should never be fulfilled. All at once this stocky, ignorant African sitting before me looks like a wonderful option.

“Someone’s coming,” I hasten to say. “If you don’t act soon, my bottle and my services will be snatched from you.”

Alarm spikes across Bello’s face. He clutches my bottle in a death grip. “Take me to Kenya, genie. Quick!”

I skip the pleasantries of an “as you wish.” With the sound of someone’s fist pounding on the door, we swirl from the room in a massive flash of wind and dissolving particles. I probe his mind and acquire the location. It’s there in the forefront of his memory: a remote area near the place he grew up, thick with pungent cedar and podo trees. We begin to merge back into normal dimensional space. Fear lingers on my tongue as a bitter metallic aftertaste. Is it the African’s fright, or mine? As the transfer comes to an end, I whisk back into my bottle.

It’s always better to stay out of sight after a location change.

Air rushes into my lungs as I regain form. I lean against my cushions, head down, hands trembling against my knees. That was too close. Much too close.