THE ORANGE TREE is my YA fairy tale retelling (fantasy) that released November 2, 2020.  It's based on a French fairy tale called "The Bee and the Orange Tree" by Madame D'Aulnoy. 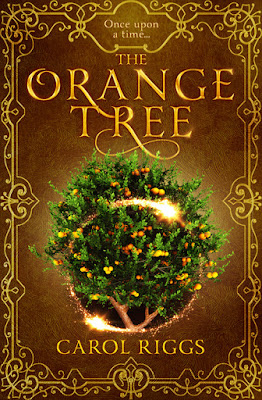 Raised by hulking ogres, fifteen-year-old Juniper can’t shake their belief that she’s puny and weak. Forget doing anything for her clan that’s risky or dangerous—like meeting another human. She can’t remember what being human is like, but she longs to explore beyond the ogre borders and learn more about her kind.

Then comes her chance. Juniper is finally chosen to fetch the tribute that keeps the ogres from plundering the human lands. She’s startled to find an attractive human male named Nolan delivering the livestock. They can’t speak each other’s language, but they’re drawn to each other like bees to a honeybush.

When Nolan is hunted by a fierce ogre, Juniper breaks all the rules and hides Nolan in a secret cave so he won’t be devoured. Every day, they scheme to get him home. If she could steal the forbidden magic wand belonging to her ogress mother, she’d have the power she needs. But does she want Nolan to leave? There’s danger whether he goes or stays. Torn between her growing attraction and clan loyalty, Juniper must find a way to keep Nolan—and herself—alive. If she fails, the ogre peace pact will be broken and the slaughter of human villagers will begin.

You can read the original tale by Madame D'Aulnoy HERE.

Chapter 1
Once upon a time in a distant land, there lived a girl who was raised by ogres.

I sneak along a narrow grassy path to reach a secluded part of the river, hoping my clan brothers don’t see me and follow. Because to them, everything is food. Their ogre brains are lodged in their bellies. Everything they want is shackled to what they can taste.

They won’t risk Mother Bila’s wrath by devouring me, but it’s not me I’m worried about.

“Faster, Cinny,” I say over my shoulder to the fox leaping behind me. “Keep up.”

She leaps in the windswept grass, nimble on her black feet, snapping at bugs with her sharp teeth.

I reach the riverbank and remove my belt. The air swirls with a blend of honeybush and white sage and metallic damp moss. I frown back up the path. My furry friend lags a stone’s throw behind. She hasn’t been out of the cavern for three days, thanks to the infernal heavy rains we’ve had. No wonder she’s ignoring me.

“Cinny, you puckle-head. Come.” I crouch down and slap my leg two times.

She lopes over, her golden eyes bright. I scratch between her ears the way she likes. In another moment, her nose twitches and she’s off again, sniffing where the pebbly bank meets the water. I suppose she’s close enough to me now to be safe.

I strip off my deer-hide tunic and skirt, and for the sake of time, plunge into the cold river with my woven undershift still on. My teeth clatter. With a chunk of strong soap, I try to wash off the stench of being trapped in a cavern with a whole clan of ogres. I need to be clean in case I’m allowed to meet my first human tomorrow.

Cinny chases a rodent through the underbrush until, with a crunch, the hunt ends. Above our heads, impossibly white clouds float, fluffy as thistledown, and the sky stretches over ogre, faery, and human lands alike. I’d love to find out if humans are as weak and disagreeable as my ogre family says. After thirteen winters with the clan and two as a wee thing before that, I don’t remember what someone of my own kind is like. A secret part of me wants to spend time with another human and prove my clan wrong.

I dunk my head underwater to wash away that last shameful thought.

A shuddering of earth and water makes me whip back to the surface, gulping air. Heavy footsteps. Ogre boots coming toward the river. So much for finding a private spot to wash. I slosh to the bank, wringing my hair, and hurry to the honeybush my fox nestles under. She’s chewing her rodent with a hungry fierceness.

My name is called, mangled like chicken bones in some brute’s mouth. I reach for Cinny to drag her from her meal, but she snaps at my fingers. “You little fool—”

“Why’d you wash, Juniper?” a booming voice asks. “You did that last fortnight.”

Whirling, I find three of my clan brothers coming into view. They lumber up with squinty eyes, their blotchy skin like dirty potatoes, their hands twice the size of my skull. My head barely reaches the height of their armpits.

I step away from my fox’s bush, hoping they won’t see her with their dim eyes, and wrinkle my nose. Ogh, they stink worse than a field of rotted skunks. “Better than smelling as bad as you, Garn.”

He snorts through his silver-ringed nose.

Zorge shuffles closer. He breathes in, deep. “You smell more…human when you’re clean.”

I wince. “Did Bila send you out to do some gathering?”

“Stop poking,” I say, shoving his hand away. “Bila will turn you into a millipede if you keep bruising me.”

He gives me a toothy grin. A few paces away, Cinny’s bush rustles.

“Ho! There’s a tasty-looking snack,” Zorge says, a glint in his eye. “Bila never said we couldn’t eat the fox.”

“Leave her alone.” My voice is firm. “Mother didn’t say you could, either.”

Zorge’s glint turns into a full-out gleam. He lunges sideways. I try to reach Cinny first, but his arms are longer. He snatches her up by the tail. She yelps and squirms as he raises his arm over his head.

Wishing I had my boots on, I kick his leg as hard as I can. “Stop! Do not eat my pet.”
“Knock it in the head first so it doesn’t squirm,” Garn says, seizing Zorge’s arm. “I want some of it.”

Zorge flings off his hand and growls. “It’s not big enough to share. Get your own.”
Resker lets out a rumbling whine. “I wants a bite, too.”

Enough. I grab my belt from the grass and whip it across Zorge’s hefty bare back. He yells, dropping to one knee while Cinny twists in his grip and snaps at him. I climb fast to his shoulder, using his kilt belt for a toehold. As he swings my fox closer to his mouth, I bite down on his ear.

He bellows. I don’t let go, even though the taste of blood and his filthy ear makes me gag. He tries to throw me off his back. I hang on by my teeth and one arm bent around his thick neck. Finally, he drops Cinny and lets her slip off through the brush. It’s only then that I let go. I slide from his rough potato-skin back and land on my feet. Resker and Garn gape at me.

“Why’d you do that?” Zorge glares, smearing blood from his ear. “I was only teasing.”

Teasing, my eye. I spit the taste of his ear onto the weeds by his boot. “I’ll hide from you brutes every single day if you keep trying to eat my fox.”

I slip back into my deer-hide clothing, strap on my belt, and stride off. “I’m not a dumpling,” I call over my shoulder. “Stop calling me that.”