THE LYING PLANET is my YA sci-fi that released September 19, 2016, from Entangled Teen. 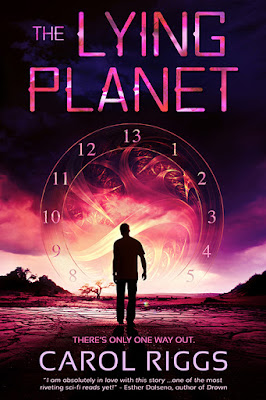 Promise City. That’s the colony I’ve been aiming for all my life on the planet Liberty. The only thing standing in my way? The Machine. On my eighteenth birthday, this mysterious, octopus-like device will scan my brain and Test my deeds. Good thing I’ve been focusing on being Jay Lawton, hard worker and rule follower, my whole life. Freedom is just beyond my fingertips.

Or so I thought. Two weeks before my Testing with the Machine, I’ve stumbled upon a new reality. The truth. In a single sleepless night, everything I thought I knew about the adults in our colony changes. And the only one who’s totally on my side is the clever, beautiful rebel, Peyton. Together we have to convince the others to sabotage their Testings before it’s too late.

Before the ceremonies are over and the hunting begins.

Reviews:
“I am absolutely in love with this story … one of the most riveting sci-fi reads yet!”
~Esther Dalseno, author of Drown

“WOW--I seriously could not tear myself away from this book!”
~Kimberly Afe, author of The Headhunters Race

"I couldn't put it down. This is not the type of book I normally read, but I think I found a new favorite author!! This book was very well written, and there will be times when you wish you could jump into the story and scream and yell, or fight along-side the characters. If there were more than 5 stars for ratings, I would give this book extra stars!!"
~Kalli Bunch, Goodreads Reviewer

"Carol Riggs' The Lying Planet is young adult science fiction at its best as one boy keeps a level head in the face of death and deceit for the sake of humanity's future. And you thought your parents were evil because they lied to you about the Easter Bunny? Hang on tight as the tension ramps up, and the race is on for survival against the odds as teens are forced to come of age and make the hard decisions no child should have to make."
~Dianne, Tome Tender

"This fantastic story kept me on the edge of my seat anxiously turning pages to discover what happens next. The characters are so well written I felt as though I knew them and really felt for each one of them as they went through the struggles from ignorance to frightful knowledge."
~Liesl Biddell, Goodreads Reviewer


Copyright © by Carol Riggs. All rights reserved, including the right to reproduce, distribute, or transmit in any form or by any means. For information regarding subsidiary rights, please contact the Publisher.

Right after morning sessions end on Friday, the scavenger team brings a charred body into the safe zone.

I’m heading down the walkway with my terraform class when I see the dingy yellow of the team’s coveralls. My first impulse is to bolt. But since we’re expected to check out the sight when it happens, we gather on the pavement like a herd of reluctant sheep. Other students join in as my girlfriend, Aubrie McKennis, reaches for my hand. All around us, smiles vanish and conversations halt while everyone stares at dried blood and crusty blackness.

Who died this time?

The thought hangs heavy in my mind as I step toward the body on the stretcher. By the build, I can tell it’s a guy, despite the signs of genomide poisoning showing through the clear body bag. And now that I’m closer, I can see who it is under the blood-caked soot. It’s Mick Garinger. There’s no mistaking the wide nose, the mouth that has gone slack. Acrid odors of grease and sulfur fill the air.

Nausea rolls in my gut. Not long ago, Mick was kicking up his feet on the training room desks, harassing shy girls, picking fights with guys, and speeding around the zone on his hoverbike, terrorizing little kids. Not to mention the fire he set in the commander’s front yard last year. With that track record, I wasn’t surprised when Mick failed his Testing and got banished from Sanctuary.

My gaze locks onto the half-visible B seared onto his forehead. That branding is a silent reminder that banishment from a safe zone equals death.

The head of the team folds his tanned arms and surveys us one by one. “We found Mick in the outer zones. What’s left of him. We’ll take him to the incinerator complex after we unload our cargo.”

No one responds. There won’t be any services or stirring words said for a banished guy. Just a stark warning of the stakes. Swallowing hard, I look away from the four men standing on the pavement. I don’t envy the team’s job. Foraging for supplies and equipment is one thing—finding dead bodies is another.

Aubrie buries her head in the space under my jaw. “Let’s go, Jay. I’ve seen enough.”

I guide her away from the stretcher. We thread through our crowd of friends, passing troubled faces, watery eyes. Murmurs and mutters continue behind us.

“That was awful,” Aubrie says in a near whisper, twenty meters down the street. “Only four months out there, and look at him.”

“The bombed colonies in the outer zones must still be thick with fallout,” I say. “If it would just rain here like the trainers say it does on Earth, it might help clear the dust.”

“Well, I wish the team wouldn’t bring the bodies back to our zone. It seems risky, even in decontamination bags.”

“I guess the bags are sealed well.” I grimace. Although Mick was a jerk, he didn’t deserve to die like that. No one deserves to be slow-burned by a chemical dust that sifts into pores and settles into lungs. I hope after the team is done here they won’t cart Mick to the primary education compound for a grisly show-and-tell, but they probably will. Once or twice a year, whenever they find a body, they make the rounds. I hate the idea of my two little sisters seeing something that gross.

Aubrie’s slender fingers tense in mine. “Now that we’re really close to leaving the safe zones, it feels scarier to see a dust-burned body. It doesn’t matter if we’re going to the other side of the mountains. Promise City is still in the outer zones.”

I’m not going to admit I’m as shaken as she is, or she’ll be even more freaked out. Both of us have taken less than a dozen work-project trips to the other two safe zones, and nowhere else past their borders. So what do we really know about what’s out there? I shrug. “I don’t see why it wouldn’t be safe. Promise City sounds like a great place to live. No one wants to come back to boring old Sanctuary after their trial year.”

She gives me a tight, crooked smile. “Or else everyone’s dead.”